The erection of the Green Street Bunker (Project 81) at the end of Sidney Street in West End was approved on 12 March 1942. The road up Castle Hill was closed to traffic on about 12 March 1942 to ensure the construction of military facilities such as this bunker were not obvious. The bunker was completed about 12 weeks later. The bunker was fully air-conditioned during its use in World War 2.

The North-Eastern Area Air Operations Room (A.O.R.) moved to the Green Street Bunker on 7 November 1942 and Townsville W/T Station took over the whole of the top floor of the North-Eastern Area Headquarters building at 42 Sturt Street. A Signals Office was established in the A.O.R. bunker at Green Street and facilities were provided for passing messages from Townsville W/T Station. The emergency Signals Office in the house at Stagpole Street was closed down at about the same time.

A residential property was located at the proposed site for the bunker. In 1942 the house was occupied by Minnie Louise Jenkins who was evicted with two weeks notice. She was allowed to demolish the house and retain the building material which was relocated to the family property at 29 Estate Street, West End. The family home at Green Street had been built by Minnie Louise and her husband William Jenkins way back to 1903. William left home the following year to try his luck in the gold fields of north Queensland, only to die on the road from Coen to Point Stewart. This left Minnie a widow for 39 years by 1942. Minnie passed away at 82 years of age on 13 September 1944. 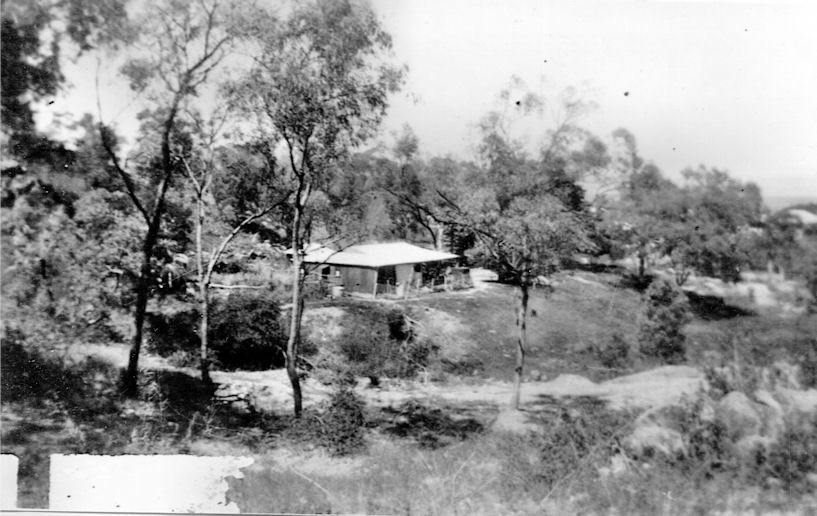 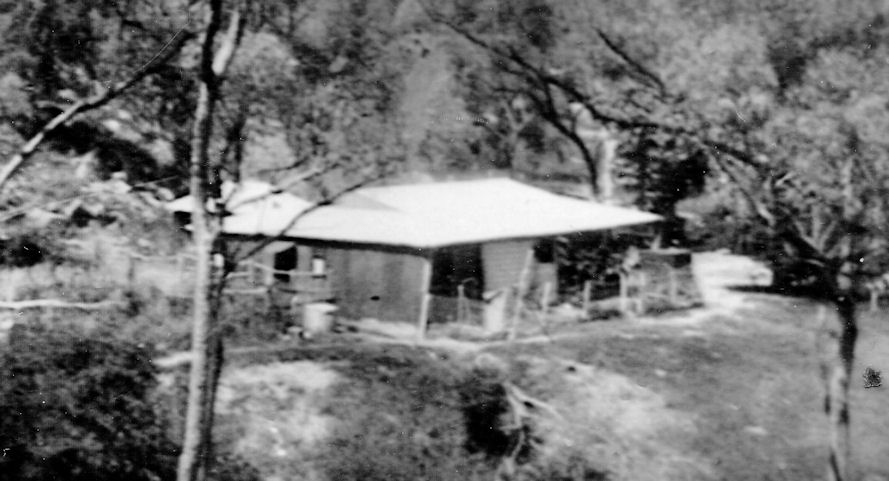 Plan of the bunker and surrounding buildings

There were 17 buildings at Project 81 as follows:-

It is believed that the bunker was used as 24 Squadron RAAF Headquarters and by the RAAF Operations and Signals group (Intelligence). The Operations Record Book for North Eastern Area Headquarters RAAF showed that the Air Operations Room (AOR) relocated from Sturt Street to Sydney Street. A Signals Office for NEA HQ was also established in the bunker at Sydney Street. with facilities for passing messages from Townsville W/T Station. At the same time the emergency Signals Office at Stagpole Street was closed down.

The building (120 ft x 60 ft) was built like a fortress, with enormous thick walls and roof. It was apparently capable of sustaining a direct hit with minimal damage.

The rooms in the bunkers were used as follows:-

Two other rooms separated by a walkway were:-

600 cubic yards of concrete and 50 tons of reinforcing steel was used to construct the Green Street bunker. Four timber buildings were located nearby. One was located on top of the bunker. The bunker was well camouflaged. It had a subsidiary buildings on its roof to give it the appearance of a domestic residence from above. It even had a clothes line. The building on the roof was used to accommodate personnel. There was also a large safe room in "Domestic residence".

Camouflage netting would have been attached from the roofline of the bunker. From the air, all the anyone would have seen was the "domestic residence" located on the roof of the bunker. The entrance of the bunker would probably have been sandbagged under the overhanging camouflage netting. For anyone arriving at the bunker, they may have thought that they were walking into the side of Castle Hill when they entered the bunker due to the extent of the camouflaging. This may have lead to some of the stories about personnel stating that they had worked inside Castle Hill during WW2.

The "domestic residence" located on top of the Green St. bunker 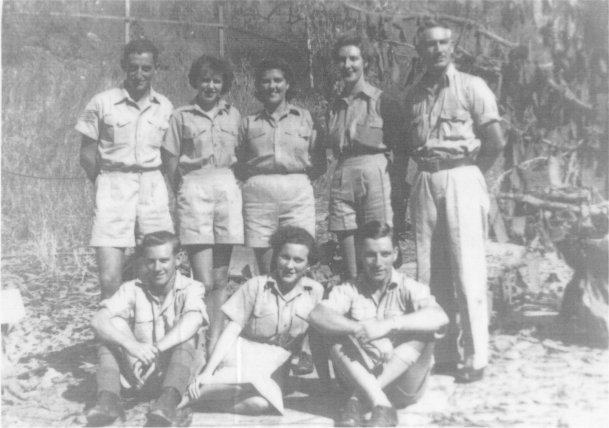 WAAAF Helen Ena Suttie worked in the W/T Station, Townsville and 12 Signals Unit in North Eastern Area Command Headquarters in Sturt Street Townsville. On a few occasions Helen was taken by “tender” on duty to a secret abode, where exactly in Townsville I do not know, as it was always at night, evening shift or “dogwatch”, 5pm until midnight or midnight until 8am. My guess is that she was taken to the Green Street bunker. The only other possibility may have been the No. 1 Wireless Unit bunker at Stuart.

"The room where I operated the cipher machine also contained a teleprinter which was connected to the main signal station in Townsville. An Air Operators room was adjacent with a hatch between. An aerial photo of this place shows a house with garden gate and fence, a bee hive, looking just like a normal house would look. We worked underground, air conditioned."

The bunker still stands and is now used by the State Emergency Services (SES).
It was provisionally listed on the Queensland Heritage Register in 2001

The bunker also had its own very large electricity generating plant. A small separate building at the end of the bunker and adjacent to the Generator room, housed the air conditioning plant. It had a sunken floor and you would walk down a small flight of stairs into the room.

The Townsville City Council purchased the Green Street bunker from the Department of Defence in about October 2001 for $50,000. In March 2001, the Townsville and Thuringowa Councils approved a joint 5 year plan for a $839,000 upgrade of the old bunker. This included repairs to the leaking roof, internal and external renovations, painting, new carports and the installation of a new generator. This was an initiative of the Townsville and Thuringowa Counter Disaster Committee.

Another one of the many rumours about secret tunnels in Castle Hill suggested that there was an entrance in the floor of the Green Street bunker. In 1985 a section of the floor of this bunker was dug up in a forlorn attempt to find the secret tunnel.

I have heard many reports that the "plant room" inside the SES Bunker has a tunnel entrance leading from it. In August 2001, I spoke to a very elderly gentleman who was a foreman with the Civil Construction Corps in Townsville during WW2. He claimed that he had been in the underground part of the Green Street bunker.

In April 2003, I met an old acquaintance from my Air Training Corps (ATC) days with No. 1 Flight at Garbutt Air Base in Townsville. He told me that the ATC were considering taking over the Green Street bunker back in the 60's or 70's. It never went ahead, but he told me that there was an underground section of the bunker, which he thought was under the generator room.

During a visit to the Green Street bunker in late October 2001, I looked inside the air conditioning plant room (see photos below). You walk down a flight of stairs into the air conditioning plant room. I noticed that there was a large slot in the wall heading back towards and under the generator room of the bunker. It would go underneath the floor of the adjoining bunker. I took the photo below which shows that it has been blanked off. 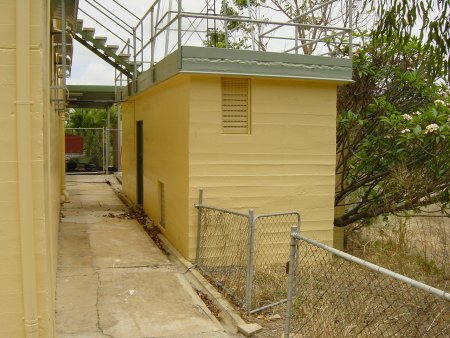 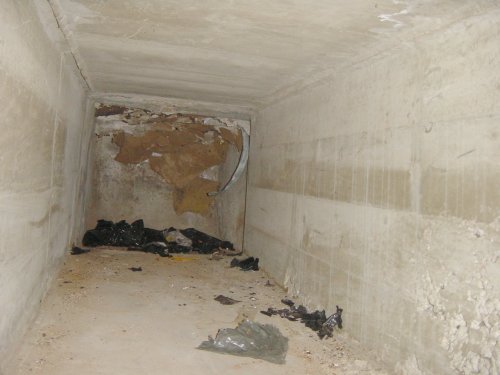 Large slot heading back underneath the bunker 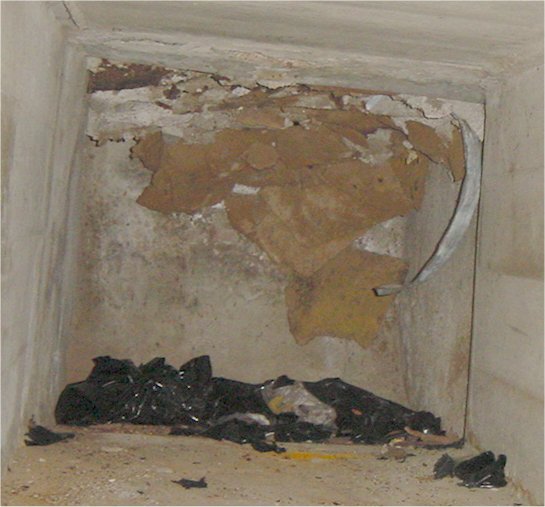 Finally in late March 2001, I received information from an ex RAAF member regarding the location of an old WW2 Command Center that he had inspected inside Castle Hill in 1958 beside the Green Street Bunker.

I received a phone call from Wal Moore, Caloundra of 36 Squadron RAAF on 25 July 2001. Wal told me that he went for an interview with North East Area Headquarters at a site in Sidney Street, West End. He said it was a very well camouflaged and secret location. Wal's wife, Fay, was a WAAAF who was living at the WAAAF barracks in Anne Street, Aitkenvale and was taken daily with a cook to the Officer's Mess near the Sidney Street bunker. Fay advised that the bunker at Sidney Street was a Signal Station for North East Area HQ. She also advised that the Headquarters for the Signal Station was located nearby, camouflaged into the side of Castle Hill. Fay's recollection from almost 60 years ago was that this HQ was about 1/4 of a mile up the slopes of Castle Hill and slightly more towards the Belgian Gardens side of the hill. Could this be the WW2 Command Center that I have heard about located near the Green Street bunker?

Fay Moore described the above buildings as follows:-

The big house on the left with the fence was the Officer's Quarters and housed as far as I can remember, about 10 to 12 personnel who were shift workers. They would walk or ride bikes to work. I can't remember other transport. At the back you can just see a house, I don't know anything about, but to the left and up the hill was the signals bunker, could be 1/4 to 1/2 mile. The house on the right was the Officer's Mess. You went up the stairs and into the lounge, which was a reading room and bar. At the back on the left of the lounge was the dining room, where the windows and louvres are. At the back of the dining room was a small window which was a type of canteen where the Officers could buy sweets, cigarettes, soap, etc. The kitchen was at the back of the house and the laundry down stairs, at the back of the house and up the hill could be a bunker.  You can just see the wall or entrance, the building next to the mess on the right, I have no idea what it could be, You may be able to work it out.

The possible "Bunker" up on the hill behind the two houses is actually a Townsville City Council water tank. I assume that is what it was then.

A bunker of identical design to the Green St. Bunker, but with an external buttress bomb blast wall was built as the Operations and Signals Building (Message Center) at Ramsay Street in Garbutt. No. 2 US Air Command, possibly under the command of Brigadier General Martin F. Scanlon, USAAF was located in that bunker.

Mrs Joan McLean of Townsville told me in late October 2001 that she and her husband "Mac" McLean had lived in the married quarters on top of the Green Street bunker in Townsville. "Mac" was involved in the crash of a B-25 Mitchell at Batchelor airfield in March/April 1943. Joan told me that there was often many young RAAF personnel quartered for short periods in the many rooms in the old Green Street bunker. Joan said that they would often talk about mucking around in the tunnels behind the bunker.

Ray Smith, Manager of Donnington Airport, 41 kms west of Townsville, said in an article in "The Independent News" on Wednesday 9 August 1995, that he entered the Green Street bunker at West End not long after the war finished and found an old blueprint of the Ross River airfield showing the location of two aircraft that collided just after takeoff. This is probably the collision of two Kittyhawks at Ross River airfield in about April 1945. Ray was employed as a scout (runner) at North Eastern Area Command HQ in the Commonwealth Building in Sturt Street.

I rang Ray Smith on 21 September 2000. He said that had also recovered some target photographs from bombing missions which he still has to this day along with the above mentioned blueprint of Ross River airfield. He also remembers seeing various charts of Queensland in the bunker. 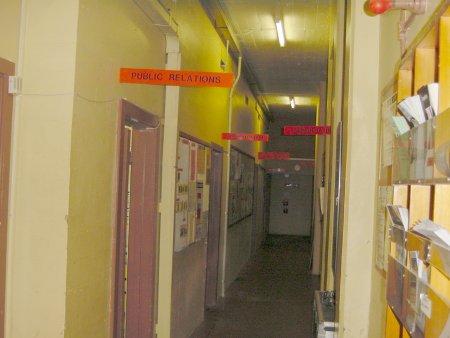 Passageway in the Green St. bunker 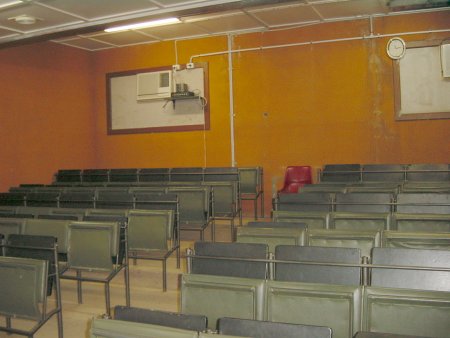 Lecture room in the Green St Bunker. This was the original Operations Room.

Photographic Section building. The additions on this side of the building were added after WW2 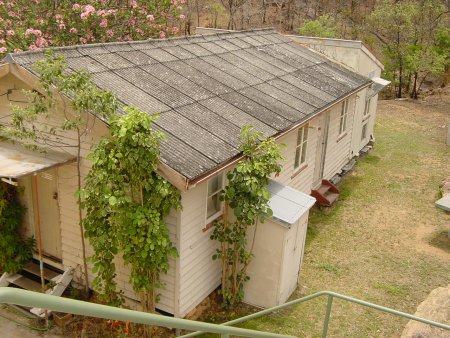 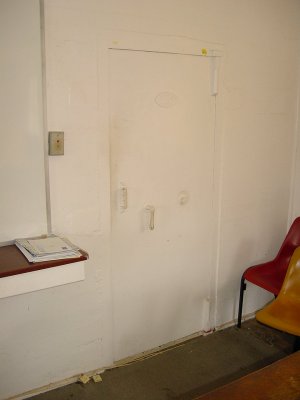 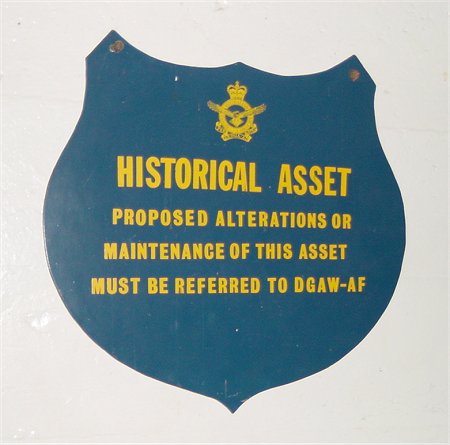 An RAAF Historical Asset sign - What is DGAW-AF?
Mark Brining advised that it stands for "Director General Administration and Works – Air Force".

I'd like to thank Lorna Crosswell for her assistance with this home page. Lorna worked in "Air Operations" at Sidney Street. She was a member of the first and only WAAAF Recruit Course in Townsville during WW2.

I'd like to thank Mark Brining for his assistance with this web page.

I'd also like to thank Noel Slattery for his assistance with this web page. His wife is the great great granddaughter of Minnie Louise Jenkins.